The Book About Dignity

This is the final point of the blog, at least in its present form. For the first time in Romania, a blog becomes a book, 100%. It is a book completely written in the public space, where the readers had the possibility to comment on it, to amend it, to influence it while it was being created. And their comments are and will always be present and welcome. The writing took 20 months.

The articles were put together in a book, and this proved to be an attempt full of surprises and emotions. Because their being published in a chronological order made this blog a kind of diary. As I was collecting the information, I wrote, I commented and I incited the people to live the same emotions as I was living. I did not intend to exhaust the subject of anticommunist resistance, on the contrary: I wanted to boost the curiosity of those who were ignoring the subject; it is only a starting point for those who want to know more and here they can find an opinion, I think a good and balanced one. 23 years ago, an anonymous wrote on a wall of Bucharest: “For Christmas, we had our ration of freedom!” – a very emotionally charged message, which was later used in the media or in the street protests for democracy, over and over, without getting trivialized, at least not for those who had lived the era of food rations. This year, on Christmas too, me, another anonymous, I will write on a virtual wall some hundreds of virtual pages, which will never have the impact of the eight real words I had mentioned above. But I feel I am the direct beneficiary of those words, as I think that, maybe, it is the first time I have used my “ration” properly. This year, for Christmas, The Book about Dignity is the present made by this blog to all those willing to receive it.

When all I had written was put together in the pages of a volume, I had to structure the information, which acquired a different consistency. I will briefly explain what this means.

The book has three parts, marked by the image of three trees, in a triptych of symbols: the tree of suffering, the tree of death and the tree of oblivion.

A very small segment of the population of Romania, generally composed of simple people, with no knowledge of the philosophy of politics, but with a lot of common sense, opposed communization. The incidents were mainly produced by the abuses of the new authority in place after 1945, and these people reacted based on their own strength and conscience, not on the law. They left for the mountains and they suffered terribly, but they might have been the only free people around the country. Their suffering is almost unknown to the general public; and so is their freedom. This is the tree of suffering.

The repression these free people had to suffer was like in the Middle Ages, in most cases accompanied by death. The human hunting ended with brief executions, or with pathetic preys, killed later in captivity. This is the tree of death, to be found not only in Romania, but also in other East European countries.

What do we know about these things, apart from prejudices? Very little. One of the unhappiest ideas is that the phenomenon of the communist resistance in the mountains of Romania is unique in the world. And why do we have to stubbornly look for this uniqueness? What is the use? It has already been proved, in a childishly simple way, that this conceptualization of uniqueness is cancelled by another enormity, which say that all the fighters in the mountains were members of the extreme right wing party, and this is not true, even if some of them were members of the legion.

The same as communist countries were organised according to identical principles, imposed by the Soviet Union, the same as a multinational corporation imposes its corporatist business processes to all its branches around the world, we should think that the reaction of the populations being communized must have followed a similar model. This is why, in the industrially developed countries, even some leaders of the communist parties tried to adapt the ideology to the specificities of their countries, and not to bluntly apply a model. Without Imre Nagy, there would have been no Budapest 1956. Without Alexander Dubček, no Prague spring. The explanation is simple: the industrialized countries had a better coverage of the left wing political movements, which were more mature, more rational, far from the communist extremists.

And in the agrarian countries, where the political left was anemic, the resistance logically belonged to people from the countryside, a violent resistance, disparate, primitive and doomed to the most painful defeat. From all the countries that had such a movement, the case of Bulgaria is almost identical to that of Romania. The differences are not important. Death is the common denominator, as would the historian Marius Oprea put it. The distance between Sofia and Bucharest is shorter than the distance between our capital and Iași, but have we ever wondered what do we know about the communism of our neighbours? Almost nothing, apart from Jivkov and the footballers in Stoicikov`s generation, that we saw on the Bulgarian television, and this is very bad. It is also true that the Bulgarians know only that Ceaușescu existed, but they have never found out that, on December 21st 1989, in the capital city of Romania, hundreds of protesters were killed. How can we then have the unbearably proud pretence that the anticommunist resistance in Romania should be known by the entire world, and mainly by the Western Europe? If we know nothing about the Bulgarian or Polish fighters, why should the French know anything about Romanian anticommunists? Who knows today, in Romania, about Jean Moulin? We should not get angry with the French or the English – if you look on the internet for some anticommunist site from Western Europe, you will find only bad jokes on forums where the enclave like extremism compromises the idea itself of normality as opposed to totalitarianism. Because this is what anticommunism is: normality, as opposed to madness, and not as opposed to another ideological “ism”, with antidemocratic slips justified by an ideology.

We should all ask ourselves the logical question: what would I have done? In 1989, in the last days of Ceaușescu`s regime, a young man who was ready to graduate from high school had just a few options. If he had said out loud what he was thinking, voicing his common sense, he could have become a victim, then a fierce opponent, even against his will. If he had shut up, he could have tried to emigrate, because Romania had nothing to offer him. If he had collaborated, he could have become a conformist stressed by compromises, or even a party activist, an opportunist for the rest of his life. Normality did not exist any longer. As far as I was concerned, 1989 came at the right moment, before I got to answer this question: what road will I take?

Finally, we forget even more easily what we do not know very well, and this happens already with the haidouks in the Romanian mountains. There are many books about them, with extremely valuable information, I can say from my own experience that the files from Securitate are hard to read, the obstacles set by the doublespeak of the semi-illiterate officers, by the official vision inevitably hideously distorted, are not meant to draw the public towards a real penitence of the reading. This is the tree of oblivion. 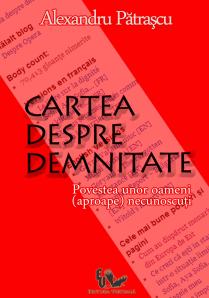 This is why I believe that oblivion can be chase away by art. And I chose for this the supreme art, Opera. The reason is simple: opera is the place where music, literature, theatre, poetry – in brief, all the other arts – get together for a complete experience. And the drama and the tragedy of the fighters in the mountains is the only one so intense as to get to the level of the drama and the tragedy in the opera. What can be more simple then? An opera production that brings on stage the dead from the forests would be, I am sure, a troublesome experience, hard to erase from the audience memory, even only for the simple reason that such a thing has never been done before.

This is the key for reading this book. And if you want to use it, you just have to follow a path. The map of this path through this blog is the content, a list where the articles are arranged in an order imagined by me, with related links, if you follow them, the book about dignity will open in front of your eyes.

Where to find this book:

Or by reading this blog, following its content, at the link below: